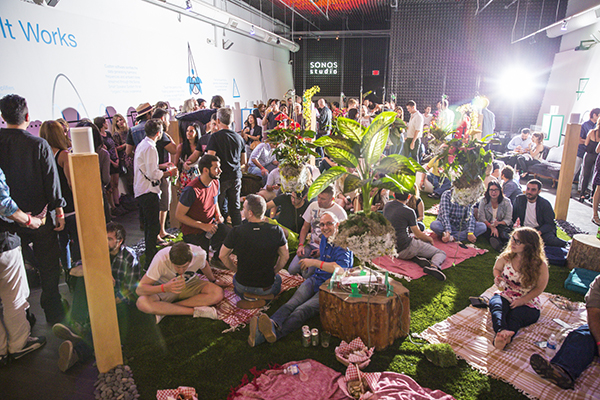 Silversun Pickups is a local LA band that is generating a lot of buzz and for good reason. After a long day of launching their album they came into the Sonos Studio for a “picnic” of sorts where guests grabbed grub from the Howling Ray’s Chicken food truck and hung in the make-shift park area that was erected as part of an exhibition taking place. You can never go wrong with food and music…..and booze too of course. 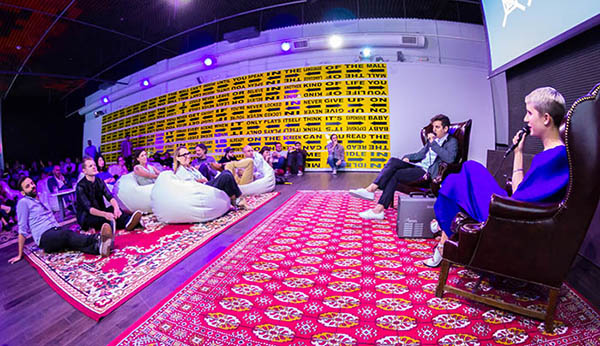 YACHT set the bar high with the introduction to their new album “I thought the Future Would be Cooler”– the latest in YACHT’S ongoing multidisciplinary inquiries into what it means to be a human being in the 21st century; among other things, it addresses the collapse of language, the placeless world of electronic networks, cities, and cultural exhaustion.

Before YACHT- the brainchild of Jona Bechtolt and Claire Evans graced the stage attendees were compounded to a slew of visual treats including contact signs that boasted song lyrics and album art projected on the studio walls. While regaling the crowd with entertaining stories and perfect banter they filled the studio with new scents like new car smell, tangerine and clover dispensed by what looked like an old school fog machine to cleanse the palette in between the 5 featured songs.

The moody blue lighting, sharp songs, great conversation and Golden Road beer made this one for the memory books and anything but an ordinary event.