Have you ever heard Jim James from My Morning Jacket talk? He’s insightful, soulful and all around hilarious. CC Events was asked to host their album release party and it was nothing short of amazing.

Jim James and Bo Koster of MY MORNING JACKET were joined by KCRW‘s Jason Bentley to discuss their new album “The Waterfall”. Topics of discussion spanned love, spirituality, nature and inspiration with humorous anecdotes provided by Jim James sprinkled in. Audience members for this private event included 75 entertainment industry folk and fans alike who were all enthralled with both the conversation and the album playback. When asked about the album title and specifically the lyric “Make the waterfall stop” Jim James offered this up:
“Literally you see a waterfall in nature and want to stop it. To see the waterfall freeze. I guess I’m saying there are times in life when its so busy and so intense and you just want to make the waterfall stop. Make your own miracle happen. Stop the waterfall if you can. Even though literally you couldn’t.”
CHECK OUT THE VIDEO ABOUT THE ALBUM AND EXCLUSIVE INTERVIEWS WITH BO + JIM HERE 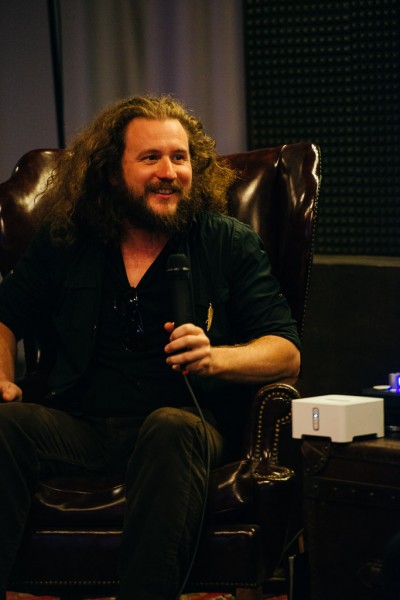